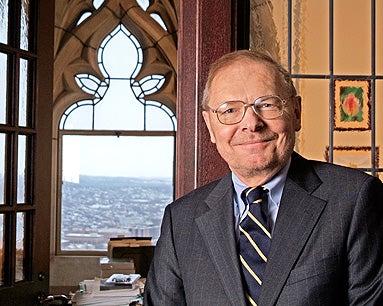 A physicist by training but an educator by inclination, Alec Stewart grew up at timberline on the eastern slopes of the Cascade Mountains in Central Washington. His family was mostly ranchers and businesspeople whose activities ranged from raising alfalfa and Shire draft horses to selling insurance and irrigation water.

Upon completing high school in Ellensburg, Wash., Stewart attended Amherst College where he majored in physics and discovered liberal education. After graduating with honors from Amherst, he returned to the Northwest to marry the valedictorian of his high school class and attend graduate school at the University of Washington in Seattle. There he received a master’s degree (MS) in physics, a master's degree (MSE) in nuclear engineering and a doctorate (PhD) in solid state physics. Following graduate school, he accepted a position as Research Fellow in Physics at the California Institute of Technology in Pasadena, Calif. At Caltech, in addition to research and publication in low temperature solid state surface physics, he won a teaching prize in the required Feynman physics course.

From Caltech, Stewart joined the faculty of the physics department at the University of Pittsburgh. Along with teaching, he established a laboratory for the study of phase transitions in systems of lower dimensionality, notably quasi- two-dimensional (flat) adsorbed noble gas monolayers. This work was supported by National Science Foundation grants, resulted in invited talks here and abroad, and produced a number of graduates with PhDs. Commenting on the research work, Stewart said, “Most people regard Flatland as science fiction. I took it seriously.”

In 1979 Stewart was asked to be the first director of the recently established University Honors Program, which he had helped to design and which was intended to meet the needs of the University’s most able, motivated, and curious undergraduate students. Under Stewart’s leadership, the program emerged with a distinctive educational emphasis on intellectual scope, a university-wide purview, and a clear conception of academic quality rooted in student attainment. “The capable and motivated undergraduate should learn to enjoy and excel at reading, writing, and thinking across the disciplines,” Stewart said. Following the establishment of honors initiatives, The University regularly produces winners of the highly competitive national and international scholarships including the Rhodes, Marshall, Truman, Goldwater, Udall, and Churchill, etc.

Establishment of the University Honors College (UHC) as the degree-granting extension of the precursor University Honors Program was the result of a suggestion by Stewart in 1984. The honors college was dedicated as the undergraduate contribution to the University’s Bicentennial on Founder’s Day 1987 with the installation of Stewart as the first dean. The establishment of the honors college added a special degree option as a fourth element to the tripartite emphasis of the honors program which stressed course work, individualized advising, and academic community among other motivated undergraduates.

The honors college is University-wide and emphasizes a collaborative attainment-over-turf administrative structure. It currently has about 1800 student participants. Within Pitt, it has emerged as an inspiring oasis for high levels of undergraduate achievement and fellowship. The honors college stewards a $12 million standing endowment, the proceeds of which are expended exclusively for Pitt undergraduates to promote higher levels of relative and absolute attainment. As Dean Stewart said, "We invest in people, not programs."

In addition to his responsibilities as dean, Stewart continued to teach regularly in the physics department. He lived in the Blackridge section of Pittsburgh with his wife, Carolyn, who taught mathematics and computer science at Franklin Regional High School east of Pittsburgh. His hobbies included backpacking, biking, hiking in the Mountain West and Pennsylvania, and short-wave high-speed Morse telegraphy where, as Stewart noted, “you have to think before you speak.”

Dean Stewart died in April 2010. In addition to his wife, he was survived by his daughter, Kirsten Marie, of San Francisco and his son, Colin Rutledge, of New York.